A nod from an old God

Early on the second full day of the walk across Hadrian’s Wall, I passed the Temple of Mithras near Carrawburgh fort.

It’s now nothing but an outline of ruined walls and a cast of the surviving cult altar stone at the north end of the temple. A wire fence entered through a stile surrounds it and a sheep had managed to wriggle its way inside and get trapped. The sheep baaed and ran to the other end of the enclosure, keeping the temple between me and it. I ignored it. I stood in front of the altar and wondered about the men who’d worshipped here back in the third century. They would have been soldiers – Mithras was a soldier’s God – and far from home. Hadrian’s Wall was mostly garrisoned by auxiliaries from other provinces such as Gaul or Frisia (now part of the present-day Netherlands) so the weather wouldn’t have been too much of a shock. But the land, even at this end of the Wall, would have been bleak enough in summer and relentlessly harsh in winter. The heat and smokiness of the small, crowded space (temples to Mithras were built as if underground without windows) would surely have been comforting compared to the bleak moorland surrounding the immediate settlement.

Shot by nickbarlow and sourced on Flickr under CC. Cheers!

As to the beliefs that comforted them, we simply don’t know. Early twentieth century theories that related Mithras to Iranian cults and centred on the idea of the slaying of a bull have been displaced by a more cosmic vision of a god who journeys through each constellation of the cosmos yet lives outside of the ultimate boundaries of the universe as set by the ancients – beyond the heavenly sphere where the stars and planets are set. Scholars, of course, differ as to the details.

Rosemary Sutcliff’s marvellous Eagle of the Ninth evokes the force and meaning of the religion for a soldier quite convincingly. She clearly draws (she was writing in the 1950s) on what are now taken to be discredited ideas but the sheer beauty that religion can evoke in the most brutish of lives is wonderfully suggested.

But beyond that, we don’t know. Mithras was a mystery religion and its mysteries died out unrecorded other than through the slurs of contemporary Christian writers or the observations of the likes of Plato and Plutarch.

Eli and Jo, two other Hadrian’s Walk-ers, arrived at the temple and worried about the sheep. It was certainly unhappy but someone needed to keep the stile open to let it out and it was determined to keep well away from the worryingly eccentric looking humans besieging it. We gave up trying to persuade it. It was a wide enclosure with plenty of grass and a farmer would be along in due course.

I stayed for a few minutes longer. Finally, I added a small coin to those left in a hollow in the altar. I bowed my head and clapped softly, Shinto style, in memory of what had been the tutelary spirit of the place and walked on.

My knee was already hurting as I trudged away from the fort, over a stile and up the next hill (and there were a lot of hills, even at this point). Going down was worse. A little while later, Sherri and Steve lent me a handful of Ibuprofen. Walking next to the wall, looking along the length of the valum and the remains as they rose towards the real heights of the wall (tomorrow’s walk!) the sun came out. Simultaneously, the ache in my knee subsided in a gentle wave of glowing warmth. It was probably the Ibuprofen kicking in but it could have been a nod from an old god. 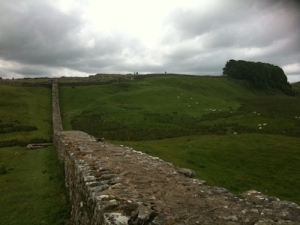 Today was a tough day. 18 miles, hundreds of stiles and a bloody great hill to drag oneself up as a piece die resistance. And then you realise the Bunkhouse is still a mile away.

I’ll mention that the scenery was surprizingly lovely, that I bravely faced down a prone cow who looked a bit tasty and that we saw our first bit of real, authentic wall.

I tramped through the afternoon with Ed Lamaze. We were both in pain from different uncooperative body parts but having Ed – a laidback fellow blogger formerly of Louisana – certainly made a tricky part of the walk for me a positive pleasure. I’m afraid I interrogated him in great depth about his home and adoptive state and he was goodhumouredly patient for the three hours we spent trekking towards the farm we were staying at.

Now on to the trivial stuff. Injuries spotted today included:
A nasty bit of tendonitis in Rajov’s foot. He also asked Dan if he had a piece of snot in his moustache.
Ed’s cracked skin on his feet. They held up but he hobbled the last few yards and fell asleep as soon as he’d claimed a bunk. He can’t stand the National either but I’ve decided to forgive him.
Justin’s blisters. The Americans are suffering.
Craig’s strained glute which migrated to his calf over the course of the day.
My own dodgy knee which kicked off at the site of the first of an insane number stiles. It was like an obstacle course for a couple of miles.
More blisters for Virginia’s Stephen and Sherry*.
Bad knees for Oya, the mysteriously named Dutch women.
A bad back for Mushy (I have no idea who Mushy is. Sorry, Mushy.)
Devastated dignity for Phil. I’ve never seen chair legs go flying in four different directions before, leaving Phil dumped square on the floor looking bemused at the injustice of the universe. Bet the chair felt worse, though.

The accomodation today is a kind of dress rehearsal for the night under canvas tomorrow.(“It’ll be nice when it’s finished!”). Ed and I got here just in time to claim the last two bottom bunks. The last arrivals are making do with a motley collection of fold-down camp beds. There is, however, a television and the Netherlands versus Uraguay. I am hiding at the other end of the room. The French flag is still a bit puzzling, though. The electricity cuts out periodically but the food (chili con carne, rice and chips with am array of cold salads) was very welcome. I’m going to keep my headphones on and read Rudyard Kipling’s Kim untill the batteries go flat then try and go to sleep.**

*You’re probably wondering how come I’m suddenly remembering all these names. Well, Les has given me a list with everyone’s emergency contacts, just in case. And where I can’t work it out, I’m making it up.
**And I slept. Ish. Now writing, tweeting and updating post in the Posh kitchen so as not to wake any of 15 sleeping, snoring, farting men in the POW style bunk room. The crew in the shared B’nB rooms at the farm have even got am indoor toilet! Wussy bastards.