I can’t quite remember the day when at Dan at All That Comes With It mooted his absolutely barking idea to have a bunch of bloggers march from one end of Hadrian’s wall to another for the benefit of the Joseph Salmon Trust (Donate! Donate!) but I was definitely having breakfast.
“There’s a bunch of bloggers marching across Hadrian’s Wall for charity,” I mentioned to supermum. The children must already have left the room or nothing resembling a conversation would have been taking place.
“You should go,” she said. “It’ll be good for you.”
“Well, maybe I will. Could you cope with the two of them for a week?”
“Don’t see why not. Could you cope with all those strange blogging types?”
Supermum doesn’t blog or Twitter. Or pay any attention to LinkedIn. She does have a Facebook profile but regards that as socially normative. You could say that she harbours certain prejudices about bloggers in general or me in particular. She also knows that the major questions for me would be “Could I cope with all these people I’ve never met? Could I share a room with strangers? Keep up conversations all day and into the evening without going insane? Deal with not being by myself for a whole week?”
Well, we’ll see, won’t we? Everyone I’ve met is lovely (come on – these are people who’ve given up a week of their time to trudge across the north of England and raise nearly £20 – loveliness is part of their job description). But, God, I’m tired – and that’s after only 6 miles!
“Good for you” is also supermum-speak for “You might actually speak to people.” I have. Dan, for example and I had the odd sense that I’d known him for simply ages. Weird, huh? But good weird.
Another weird thing was being the one presented with the bill for twelve people in the Indian restaurant this evening. Perhaps I looked the most authoratative. Perhaps I annoyed the waiter the most.
I’m also pretty sure I’m glad I’ve come, though hearing how little elf cried because I wasn’t there and dudelet whispered “I miss daddy” just before he went to sleep can sap a man’s resolve a little. I just have to remind myself that they don’t seem to care that much when I’m actually at home (even though it isn’t exactly true).
And finally, here’s an iPhone picture of a weird Newcastle shop. How many instances of “weird” was that? 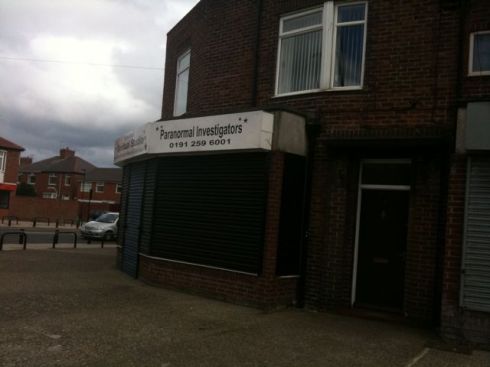 Straight Into Darkness – Dudelet, Balka and me

Dudelet and I have been having one or two issues lately. Actually, supermum’s had one or two strained moments with dudelet this week, as has little elf. To be honest, I think we’re all taking chunks out of each other on a regular basis. The flat is too small, the neighbours are regularly complaining about the noise of the children running around above their heads (and as luck would have it, they seem to be constantly working from home) and my search for a new job, the deus ex machina supposed to engineer an escape from both small flat and increasingly anally retentive neighbours, keeps running into rejections or deadends. There’s a bit of an atmosphere, a sense of ‘between stations’ and children pick up on that sort of thing.

More disturbingly, dudelet’s had a few sleepwalking incidents, something classically associated with stressed children. Little elf seems relatively untouched but her insistence on doing everything herself and ‘owning’ particular bits of floor or furniture, or the whole of our bed is driving the other three of us to distraction.

So supermum took LE swimming this morning whilst dudelet and I stayed behind. I initially banned TV – we were going to find more creative outlets – and we built railway tracks, raided the freezer, made smoothies and drew. Then dudelet, who refused to countenance leaving the house, went into pester overdrive to at least play on the GameCube. After some debate, we struck a deal. He’d get to play Zelda for 45 minutes then we’d pack up and head for the Tate Modern where he’d spend an equal amount of time trekking round the exhibition of my choice.

And that’s exactly what we did.

I wanted to see the Van Doesburg exhibition but before that, we tackled the current big installation in the cavernous space of the Turbine Hall – Miroslaw Balka’s monstrous steel box of darkness, 13 metres high and 30 metres long.

Dudelet wanted to see it (he loves the big exhibits and Louise Bourgeois’ Maman is a touchstone for both of us) but was scared – it literally feels like one is walking into a wall of darkness. So I carried him and we slowly walked up the ramp into the immense steel box, a giant’s freight container. To me, it was nowhere near as scary as it might have been. It was too crowded and after a while, one could make out white shirts or scarfs hovering like after-images in the blackout. But the sense of lost or incalculable space was intense. I couldn’t see or sense where the darkness ended in walls and the ceiling might as well have been a night sky devoid of stars or light pollution. We were at the bottom of a huge well, surrounded by other blinded, shuffling, giggling denizens. I moved forward slowly, dudelet in one arm with his legs wrapped around my waist whispering a running commentary, and my other arm stretched out ready to encounter a wall or The Other. When I finally met the end of the box, I almost jumped. The wall was velvelty, almost warm. Dudelet could see a faint crack of light from an imperfect seal to our right so we made our way south untill I met another wall with the same faint shock at the unexpetedly soft texture I encountered. Then we turned east, looking back the way we came. The illusion vanished instantly. It was a dull light but all the people entering the open end of the box were silhouetted against it. Dudelet let me put him down and we made our way out.

It’s a piece of art that references many things – the cattle cars and gas chambers of the Holocaust, the simply unknown – but on a crowded Saturday afternoon, it offers more simple lessons about the tricksiness of the spatial and how my beautiful boy still trusts me enough, despite all the shouting and strife of the last couple of weeks, to let me carry him into darkness and out again.